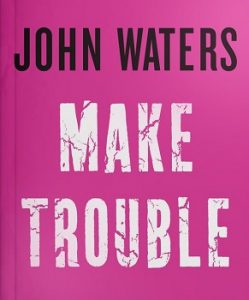 Quite often, I become a fan of an artist more than her/his main art, compelled by her/his general style, philosophy, humor and insight. For instance, I can take or leave most of Kandinsky’s stuff, but his philosophical statements on visual art and aesthetics are priceless. Likewise with Marcel Duchamp, Marlene Dumas, Picasso, Andy Warhol, David Hockney, Francois Truffaut, Henry Rollins, etc.

This is the nature of my appreciation for provocateur, lovable oddball, fetish-fetishist John Waters, a man who is, I think, an American treasure (a term I don’t use loosely). He’s a well-read Twain-/Mencken-like humorist, a puckish social commentator, a very self-aware critic and a living pop-culture legend with much to say and depth in even his shallowest statements and wisecracks. Despite his notorious fame as a filmmaker, I can’t help but prefer his writings and delightful interview answers. I understand the cult following for his movies, get why those movies are creative and profound, and I certainly have favorites (Polyester, Cecil B. Demented and the underrated – and ultra-quotable – A Dirty Shame), but I’m not an especial fan of the overall filmography.

Waters’ books are denser collections of his wit, his too-rare sexual honesty, his pearls of jizzdom. Part-memoir, part-essay, part-fiction and part-diary, they make me imagine their author grinning like a maniac (John Waters + maniac = redundant) while typing away in his madhouse, wearing nothing but underwear and his trademark mustache (which is every bit as iconic as David Lynch’s hairdo). My favorite books of his are Carsick: John Waters Hitchhikes Across America, Role Models, Shock Value, Unwatchable and Art – A Sex Book, the last two titles being worthy art books up there with Madonna’s and Fabian Baron’s orgasmic Sex, Frank De Mulder’s Heaven, Richard Kern’s New York Girls, and anything by Helmut Newton and Robert Mapplethorpe.

Fearlessly gay and astutely “fringe,” Waters, thankfully, is a rarity not only for his repudiation of political correctness but also for his deliberate apartness from typical, monolithic queer righteousness. As he told Roger Ebert back in 2010:

I don’t fit in with gay people either. I’m gaily incorrect. I kinda want gay people to be outlaws again. I don’t wanna get married but I certainly believe that people have the right to be married. I never fit in. There’s too many rules in the gay world too. So if I ever talk about my homosexuality, which I certainly do, I don’t do it in a very gaily correct way.

In the same individualistic spirit, in Carsick’s acknowledgements he defended Middle America against bigoted generalizations:

But more than anything, I’d like to praise the drivers who picked me up. If I ever hear another elitist jerk use the term fly-over people, I’ll punch him in the mouth. My drivers were brave and open-minded, and their down-to-earth kindness gave me new faith in how decent Americans can be. They are the only heroes in this book.

That passage reminds me of excellent advice he offers in Make Trouble, his cute, little latest book recently released by Algonquin Books of Chapel Hill. Presenting the text of a 2015 graduation address he gave at the Rhode Island School of Design, it features the quaint illustrations of Eric Hanson, who also did the cover art for Role Models. Hanson’s images enhance the speech’s main points as well as capture the unpretentious eccentricity of Waters with a rather simple style that’s reminiscent of the likes of Ray Pettibon, Tomi Ungerer and Pittsburgh’s own t. jungle. John Waters himself is a sort of incarnate cartoon, an oddity that might’ve burst from the mind of Charles Addams or Edward Gorey. (And, on Make Trouble’s ninth page, there’s a drawing that depicts the imagery I mentioned earlier: Waters typing away in his boxer shorts.)

The book’s title comes from Waters’ central instruction to the graduating students: “It’s your turn to make trouble.” The point is for the current generation to “go out into the world and fuck it up beautifully,” to produce upsetting, attention-demanding results. “Make me nervous!” commands Waters. For me, the “make trouble”/make nervous thing is usually an overdone (essentially insubstantial) imploration, but coming from John Waters it’s slightly less boring and seems sincerer. To make him nervous would be quite a feat, in other words. Especially since he tends to talk about how what used to be shocking, avant-garde, “perverse” and non-conformist now dares speak its name and struts proudly in the daylight.

The question is what could possibly make trouble these days. Even John Waters is no longer the subversive force he once was. “Think about it: I didn’t change,” he writes. “Society did.” His non-hetero sexuality is certainly out of the closet, to such an extent that the standards of social/cultural coolness have flipped around: “And don’t heterosexual kids actually receive more prejudice in art school than the gay ones? Things are a-changing. It’s a confusing time.”

The best part of the speech involves the thought-policing/fanatical censorship so prevalent on college campuses these days, particularly in the form of “trigger warnings:

…a trigger warning – the amazing concept I’ve heard about in which you’re supposed to warn students if you’re going to talk about something that challenges their values. I thought that’s why you went to college. My whole life has been a trigger warning.

Waters’ intellectual/artistic honesty and respect for genuine liberty is cut from the same cloth as what Christopher Hitchens called George Orwell’s “power of facing,” an honest assessment and criticism of even one’s own ideology, group, tribe, whatever. Contrary to many Progressives’ (or, worse, SJWs’) isolating, silencing tactics against just about anything that offends or rebuts their idolatrous ideals and myopic opinions, Waters goes as far as to suggest reaching out to opponents in hopes of achieving some kind of common ground or affection: “Listen to your political enemies, especially the smart ones, and then figure out how to make them laugh.” And he debunks the popular “eat the rich” mentality: “Don’t hate all rich people. They’re not all awful. Believe me, I know some evil poor people, too. We need some rich people: who else is going to back our movies or buy our art?”

I must admit that the end of the book came to soon for me (ahem). I believe that the speech itself could’ve included some more junk in the trunk, but I’m biased toward long winds rather than economical breezes such as Make Trouble. Really, John Waters is always worth reading or listening to.

Come to think of it, the book could’ve had only one page printed with the following tidbit and still been worthy:

I’m also sorry to report there’s no such thing as karma. So many of my talented, great friends are dead and so many of the fools I’ve met and loathed are still alive. It’s not fair, and it never will be.

How’s that for troubled Waters?