ARTHUR AND SHERLOCK: CONAN DOYLE AND THE CREATION OF HOLMES by Michael Sims 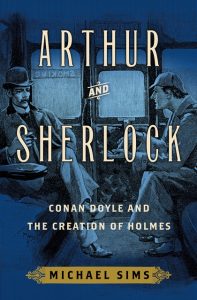 Here’s a clue: My favorite fictional detectives are holding a pipe and a cigar, respectively. If you guessed Sherlock Holmes and Lieutenant Columbo, you guessed correctly. Besides sharing an oral fixation (and an anal one, if messy smoke and ash are Freudianly considered), two other notable similarities between the characters are their social divergence and their – as much as I despise the term – quirkiness. Beyond those aspects, Holmes is polished, debonair (another term I use here despite despisal), distinguished and eclectic in his talents and interests, while one doesn’t sense that unkempt, slouchy, raspy Columbo moonlights as a bookworm, let alone specializes in antique violins or the martial art of Bartitsu. Also, Columbo is somewhat short and stalky while Holmes stands over six feet tall and could give Ichabod Crane a run for his skinny. Columbo intuits while Holmes deduces (or, as we’ll see later, often induces). In less words, the two seem to be the poles of a spectrum of fantastic sleuths that we in pop culture have come to love.

Temptation to credit the ubiquitous genius of 221B Baker Street as the detective genre’s prototype is understandable, but Doyle’s immortal creation owes his existence to several key precursors, many of which are covered in Arthur and Sherlock: Conan Doyle and the Creation of Holmes, written by Michael Sims, author of The Story of Charlotte’s Web, Adam’s Novel and The Adventures of Henry David Thoreau. The book is both biography and origin story, the former of a real man immortalized in history and the latter of a fictional man who can be easily thought of as a historical figure.

For some time, Doyle had been admirer of Edgar Allan Poe, in fact dubbing him “the father of the detective tale,” and Poe’s Monsieur C. Auguste Dupin character seems to be the central literary inspiration for Sherlock Holmes. Dupin stars in “The Murders in the Rue Morgue,” “The Mystery of Marie Roget” and “The Purloined Letter,” displaying his virtuosic ratiocination and attention to enlightening details. Praised for the intricate prose of his pre-genre detective tales, Poe pooh-poohed overestimation of his purported prowess: “[W]here is the ingenuity of unraveling a web which you yourself (the author) have woven for the express purpose of unravelling?” Doyle also is respected for his clever plots, but, as Michael Sims points out, “sometimes the inconsistencies in Holmes’s character resulted from [his] own slapdash, devil-may-care approach to writing. He didn’t worry about details and apparently considered internal consistency a minor virtue in fiction…”

Other major precursors highlighted by Sims are Charles Dickens’ Inspector Bucket (Bleak House), Ebenezer Gryce in the mysteries of Anna Katherine Green (to whom Agatha Christie is indebted), Voltaire’s Zadig and even the Dupin-inspired iteration of d’Artagnan in Alexandre Dumas’ The Vicomte of Bragelonne. The remotest proto-detective addressed, on whom Sims dedicates much attention, is the Biblical Daniel. The mystery before Daniel was how the sacrificial food put before the idol of Bel was eaten in a secured room each night. Rather than accept the belief that the god itself consumed the food, Daniel proved the unscrupulous priests treat themselves and their families to the hearty meals by gaining entrance to the room via a concealed door. In this Daniel shares the debunking power of Poe’s Dupin, who, as Sims puts it, “eschews the supernatural in deciphering the mystery at its core.”

As I read Sims’ well-researched backstories with great interest, I kept wondering, What about Porfiry Petrovich in Dostoyevsky’s Crime and Punishment? Arthur and Sherlock reveals no connection to the character nor Dostoyevsky, but I think Porfiry would’ve been worth mentioning, if not just for his inclusion in the long list of early detective-genre influences. Porfiry is similar to Holmes in that he’s a bachelor askew with society, and he shares Columbo’s psychological inuition and mock ignorance designed to dupe – and infuriate – criminals he already knows are guilty – down to the trademark Columboan “one more thing”: “Well, you may abuse me, be angry with me if you like, but I can’t resist. Allow me one little question (I know I am troubling you).” (By the way, Porfiry also inspired Chesterton’s Father Brown.)

Moving from literary ingredients to literal ones, much of Arthur and Sherlock involves the great Professor Joseph Bell from the University of Edinburgh’s Royal College of Surgeons, a remarkable man (and somewhat of a character) who was a living model for the hero Doyle, his pupil, would go on to create in the future. Able “to perceive details about patients’ personal lives,” Bell touted observational prowess and deductive thinking as requisites for successful “diagnosis of any and every case.” Even after Doyle became famous for his Holmes material, he gave credit to his inspiring mentor Bell in an interview in The Strand Magazine, a paper which published his stories regularly. In response to the author’s attribution, Bell humbly told journalist Harry How that “Dr Conan Doyle has, by his imaginative genius, made a great deal out of very little…”

With Holmes Doyle sought to add to introduce “the latest incarnation persistent ideal in literature…a just, rational hero whose eagle eye and respect for evidence enabled him to stride boldly free of bias and preconception.” Unlike the detectives who won by accidents of fortune or for undisclosed reasons, earning Doyle’s annoyance, Holmes would rely on close attention to and analysis of concrete evidence, as well as “extensive reading,” which equips one with a convenient information base for comprehension of and rational engagement with a vast variety of situations. Though he is associated with deduction as his primary detection method, Sims points out that he mostly used induction, reasoning from the particular to the general more than from the general to the particular. It’s not just coincidence that Thomas Macaulay, a writer particularly admired by Doyle, wrote deeply about Francis Bacon (the famous proponent of the inductive method and author of Novum Organum) in the second volume of Critical and Historical Essays.

Doyle designed his intrepid Holmes to be “a hero who was larger-than-life but believably complex” and, much to Nietzschean readers’ satisfaction, “naturally above bourgeois morality.” In his notes Holmes is described as a “reserved – sleepy eyed young man – philosopher…collector of rare Violins…” Nowhere in those notes can references to Holmes’ iconic deerstalker hat be found, for that wardrobe detail first appeared in an unauthorized illustration in the Bristol Observer. Normalization of the hat was established by later illustrator Sidney Paget.

After balancing his career as a surgeon and having several short stories published to no avail, Doyle believed that only a novel would attract literary success, so he finally completed and sent out the only copy of his Narrative of John Smith. The manuscript got lost in the mail and was never recovered – and Doyle never managed to rewrite it. Often, such aborted artistic efforts either deject or open new creative paths, and, as fortune would have it, Doyle debuted his Downing Street duo with A Study in Scarlet (originally called The Tangled Skein), followed by Holmes stories published regularly in The Strand Magazine: “A Scandal in Bohemia,” “A Case of Identity,” “The Bascombe Valley Mystery,” etc. – titles that are now considered classics. Great magazine sales led to increased demand, growing popularity, critical success, widespread respect and financial security – so much that Doyle quit the medical profession without a second thought.

In Arthur and Sherlock there’s a relative scarcity of attention to Doyle’s serious interest and activism in Victorian-era spiritualism (particularly his relationship with Harry Houdini), since immersion in the spirit world eventually took precedence in both his and his wife’s lives, but I understand that the book is primarily intended as a study of Sherlock’s origin, and I do appreciate what Sims does include, such  as the following affecting passage:

Arthur later recalled how such painful experiences helped turn him away from the traditional religion of his upbringing and boarding school. He lost any sense that life in this world is a spiritual obstacle course leading to the next, and as a result, he found himself no longer able to believe the hoary old stories about a benevolent God.

Of course, he later sought “greater satisfaction than he found in a materialist’s view of life,” widening the scope of his search with medium consultations, séances, related writing and general spiritualist preoccupation. Veracious or not, we can thank whatever spirits nudged Arthur Conan Doyle into naming Sherlock Holmes Sherlock Holmes instead of (shudder) Sherrington Hope.

Michael Sims shows both worthy knowledge and perceptivity in Arthur and Sherlock, and he was courageous to even consider adding another book on this popular subject, which is a risk similar to taking yet another trick photograph of “touching” the top of the Eiffel Tower and posting it on social media. Just as some of those photos are done better than others, Sims’ book excels, and – though I think the book ends rather abruptly – I’m pleased to say that this volume certainly deserves a respectable place in Doyle/Holmes scholarship, both as a rich resource and an engrossing bit of history.