mini-review of ELEVATION by Stephen King 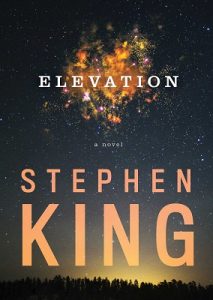 (I hadn’t planned on spieling on this book, but I felt compelled to pump out a little something after enjoying it so much.)

Elevation is a 146-page novel about a male protagonist who finds himself in an inexplicably weird, impending situation and is forced to find his footing (eventually literally) in it – which seems to be the commonest template for a lot of Stephen King books. That’s not a knock; it’s just acknowledgement of King’s knack. This time a man named Scott Carey realizes that he’s losing weight, steadily and disturbingly quickly, without any changes to his size – and his weight can’t be altered by clothing, footwear or even holding heavy objects. He was 240, then 212, and so on. Considering the rate of his bizarre weight loss and the fact that a body’s weight is finite, Scott prepares himself for what he refers to as Zero Day: when he’s down to zero pounds and, somehow, death will follow.

A retired doctor named Bob Ellis, Scott’s close friend, is taken into his confidence, and a shunned lesbian couple, Deirdre and Missy, whose restaurant (Holy Frijole) is on the edge of failure, become involved, thanks to Scott’s neighborly initiative and determined opposition against prejudice. The relationship between Scott and the two women starts out tense, but it evolves into something enviably warm.

Yes, Elevation includes yet another iteration of King’s typical small-town bigots who are too ignorant for belief and can’t even pronounce the word “lesbians” correctly. (Is Castle Rock really so full of shitty people?) As a something-teen-year-old I was shocked upside the head by the odious treatment of gay characters and the heroic concern for them back in King’s leviathan masterpiece It, but nowadays it just seems tropey when most yokels are depicted as passively (institutionally) homophobic at least or as dastardly, rabid Westboro Baptists. These days, thankfully, the true shockers are jerks who do discriminate against non-straight folk, not noble-spirited individuals who show respect and affection for them.

Anyway, that’s really a very minor gripe, because this particular iteration sets up a conflict that parallels Scott’s weight-loss emergency and allows for a heartwarming sacrificial act for the sake of the Deirdre character’s self-worth and dignity in the eyes of the backward town. (You have to read the book for more details on all that.) Chapter Four, “The Turkey Trot,” about Castle Rock’s annual 12K marathon, is both thrilling and heartening, verging – for this reader – on positive tearfulness. It struck me as a Norman Rockwellian existential rebuttal to King’s gutting The Long Walk novella, originally published under his Richard Bachman pseudonym and one of the many obsessions of my youth.

Speaking of comparisons to the author’s previous work, it’s not brain surgery to also point out the connection to Thinner, another book by alter-ego Bachman and a previous unnerving perspective on body image and weight gain/loss that seems to haunt the backs (and fronts) of most of our minds.

Elevation is dedicated to author Richard Matheson, surely for his mid-1950s book The Shrinking Man. The protagonist of that story found himself inevitably shrinking: a phenomenon including weight loss, obviously. What happens to Scott in King’s book is sort of an/a homage to what happens to Matheson’s character (literally in the opposite direction), and every bit as audaciously and wonderfully far-fetched.

Biting my typing fingers to avoid major spoilers, I must say that there’s a particular passage that seems to (wittingly or unwittingly) metaphorize the basic gist of Scott’s newfound sense of transcendence and the actual physical fate that he chooses. It takes place during the 12K race:

The rain seemed to hesitate for a moment, time enough for Scott to think it was going to hold off until the race was over, and then it came in a full-force torrent…Visibility dropped to twenty percent, then to ten, then to almost zero. Scott thought the cold rain felt more than delicious; closer to divine…

…Scott had never been happier in his life. Only happiness was too mild. Here, as he explored the farthest limits of his stamina, was a new world.

Everything leads to this, he thought. To this elevation. If it’s how dying feels, everyone should be glad to go.

I owe so much of my imagination and literary appreciation to Stephen King. He’s an American and international treasure, and he should/will surely survive history as a literary icon. Tomes such as It, The Tommyknockers, The Stand and The Talisman (with Peter Straub), as well as shorter ones such as Misery, Cujo and Christine, were crucial molders of me back in the day. And I continue to appreciate much of his stuff: Under the Dome, The Duma Key, Cell, Doctor Sleep(!), Revival, 11/22/63. Honestly, I like King’s bigger, heavier stuff most of all, but Elevation reminded me that something apparently diminutive can pack a fuckload of weight.