Meditation on inevitable death should be performed daily.
Hagakure: Book of the Samurai

For many years I’ve returned to some of the old Peanuts compilation books for both their frivolity and profundity, on top of the straight-to-the-heart nostalgia injection they provide. It’s easy to underestimate Charles M. Schulz’s visual and metaphysical brilliance, but nobody can sanely deny the apt ontological summing up of Charlie Brown’s “Good grief!”

Anyway, I recently revisited Let’s Face It, Charlie Brown!, which includes selected Peanuts stuff from 1959 and 1960, and was blessed with a new appreciation for a thematic sextet of Snoopy-centered strips featuring the iconic dog’s contemplation of falling leaves. Snoopy at once pities and resents the leaves for falling to the ground without resistance, without panic and anxiety, claiming that if he were a leaf he’d “kick and scream, and put up a real fight.” He sees each fall as a regrettable death accepted without question, mistaking one attached leaf as “someone with sense enough to stay put” before it lets go and earns a disappointed sigh from Snoopy. Surely, this thoughtful beagle refuses, to use Dylan Thomas’ famous poem’s more famous phrase, to “not go gentle into that good night.” 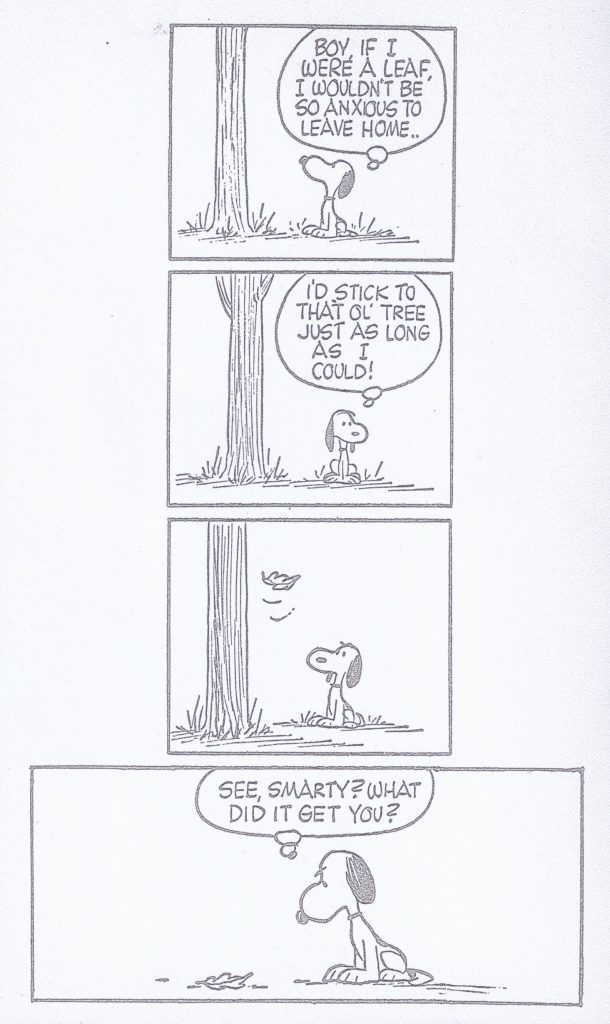 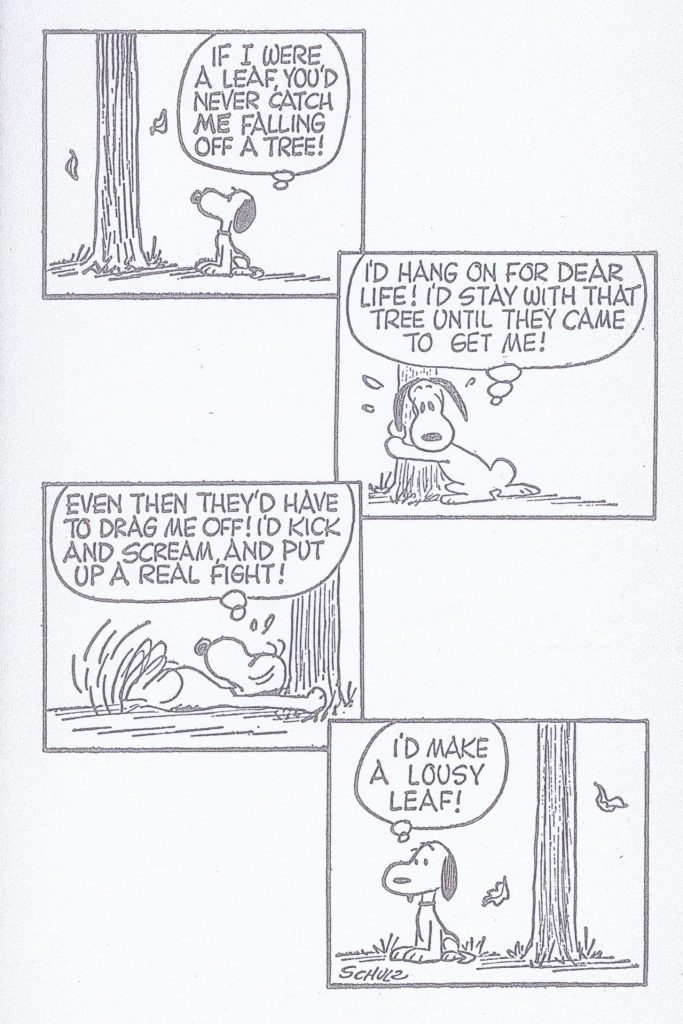 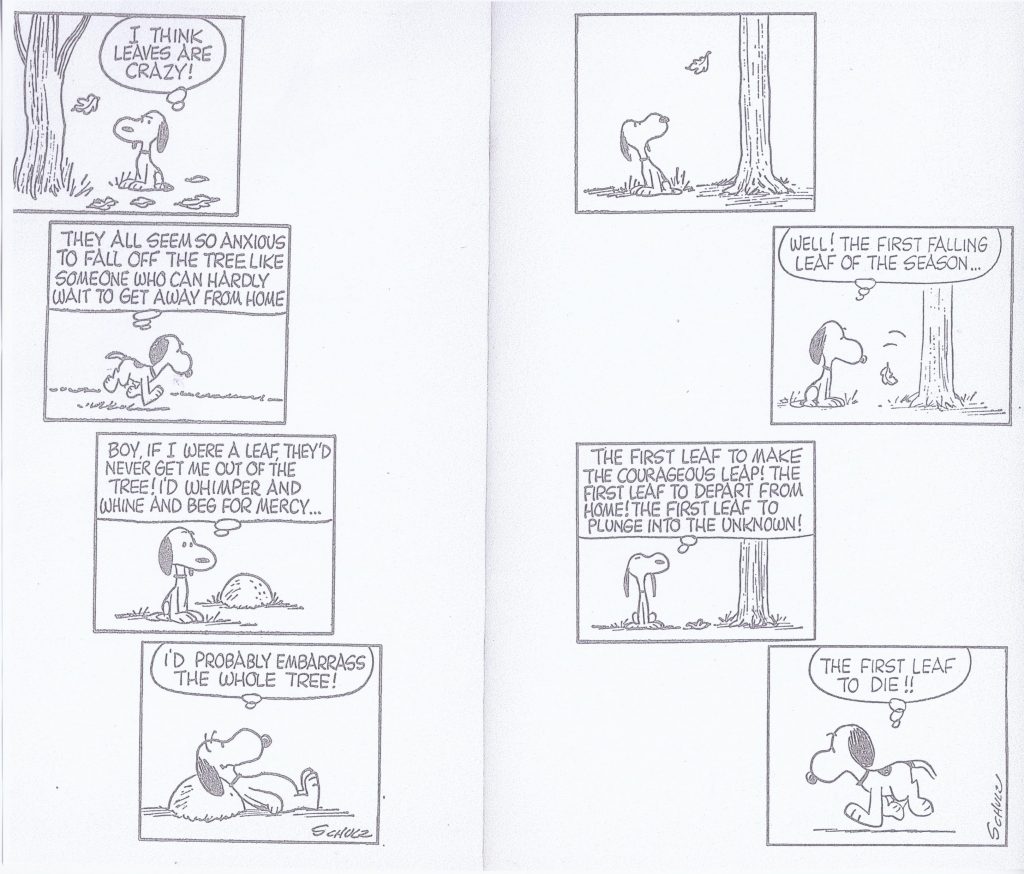 Which reminds me of the fifth and final act of Edmond Rostand’s Cyrano de Bergerac, in which a dying Cyrano visits his beloved Roxane and reveals to her that he’s the heart behind the second-hand poetic words that wooed her. Autumn leaves are blown loose by a breeze, prompting Cyrano to note their bravery, their graceful carelessness. Like Snoopy, Cyrano admits his inferiority to the leaves as far as facing death goes, but, unlike Snoopy, he both admires and envies the leaves. And Roxane redirects his melancholic attention, bidding him to “let the dead leaves fall the way they will.”

Thomas Fowler, the protagonist in Graham Greene’s The Quiet American, provides a milder reaction to our impending falls from the tree (and an ultra-apt choice of closing verb): “I was afraid like a virgin of the act. I would have liked death to come with due warning, so that I could prepare myself. For what? I didn’t know, nor how, except by taking a look around at the little I would be leaving.” 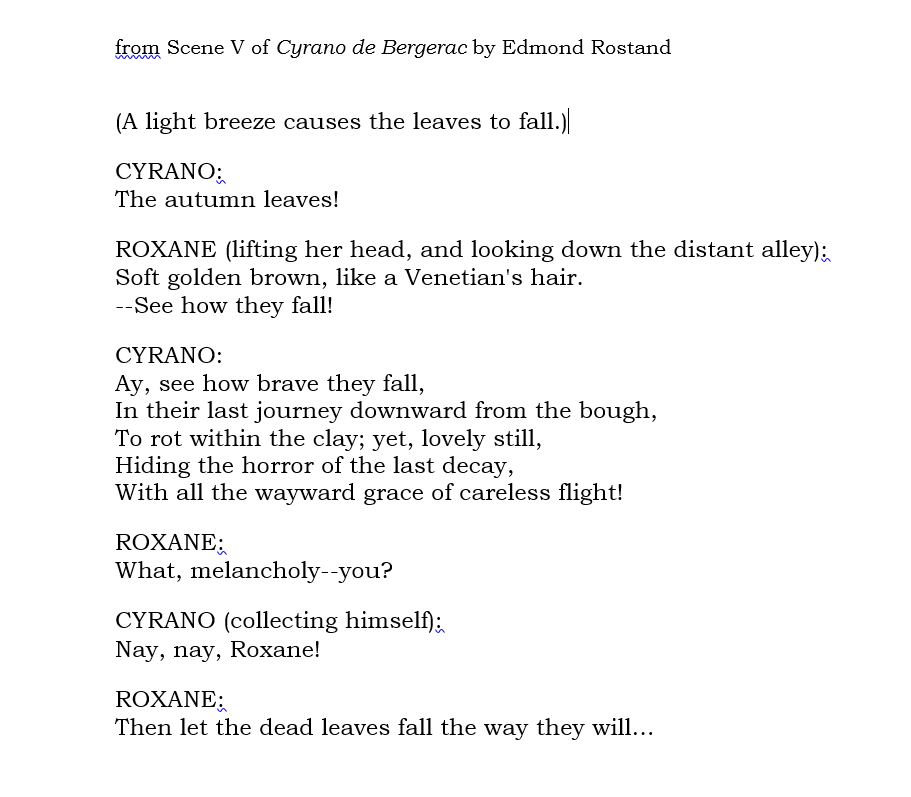 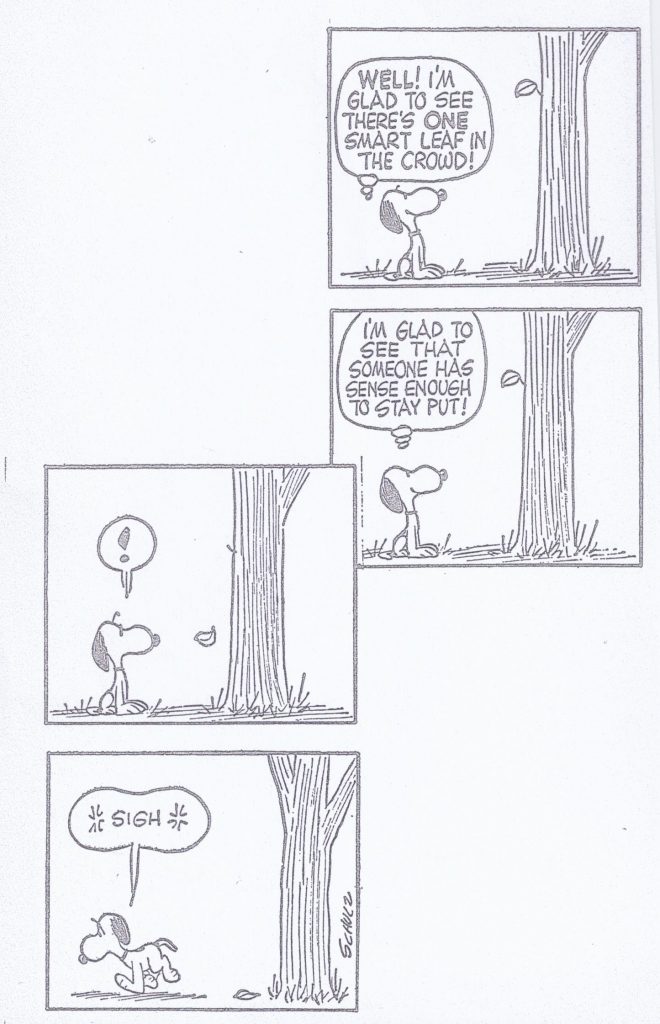