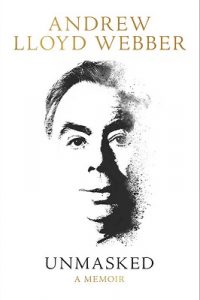 Andrew Lloyd Webber’s Unmasked: A Memoir is as colorful, vigorous, flamboyant and buoyant as just about any of his household-name shows. I’m often more attracted to the artist than her/his art, and such is the case with Webber – though my appreciation for his work is quite potent. (His Phantom’s sorrowful rendition of “Masquerade” has wrecked me since childhood.) Needless to say, he’s a fascinating character and, to use a word I use only carefully, a genius, the opposite of his too-humble self-description: “the most boring person I have ever written about.” Because of the evident richness and depth of Webber’s life and career, I can tell that this memoir would have been a much freer animal if it had been written in a less puritanical, offense-vigilant time. I’m reminded of something the inimitable Louise Brooks wrote in the epilogue of Lulu in Hollywood: “I too am unwilling to write the sexual truth that would make my life worth reading. I cannot unbuckle the Bible Belt. That is why I’ll never write my memoirs.”

Webber himself seems quite aware of this fact, writing in Unmasked’s dedication: “[F]or my fabulously un-PC Auntie Vi, most of whose sayings I could not possibly share in 2018.” I suspect that he’d like to divulge more than only his renegade aunt’s thought crimes, and I think it’s sad that our current thin-skinned era discourages such candidness. “Impossibly, adorably, unrepeatably politically incorrect Auntie Vi” is a grand, larger-than-life monument of Webber’s impressive life, and I think her opulent spirit factors deeply in her nephew’s art. Oh, and according Webber, Auntie Vi was “author of the first gay cookbook” in the early 1960s. (We mustn’t neglect Alice B. Toklas’ cookbook from about a decade earlier, however.)

Webber seems to have been destined to do what he does. His “Mum” was a piano teacher for children, his younger brother Julian was a cellist, and his father, a professor at the Royal College of Music who lacked the ambition to really realize his potential, “would have been a fantastic film composer.” Out of his “three great passions,” art, architecture and musical theater, Webber, as we all know, went with the latter.

His seminal inspirations include the “un-PC story” of the Gigi movie adaptation, South Pacific (which “completely pulverized” him), and Oh Boy!, after which “the words rock ‘n’ roll were synonymous with musical theatre” for him. (Obviously, the culmination of this synonymy is the adaptation of School of Rock.) Above all, it seems, the pair of Rodgers and Hammerstein deserves special credit for the formation of Andrew Lloyd Webber. “It’s hard today to understand just how low the reputation of Rodgers and Hammerstein had sunk in the eyes of the British intelligentsia,” he writes. “I still remember the father of a school friend thinking I was a congenital idiot for loving the ‘sentimental twaddle’ called Carousel.” Thanks to a fan letter he sent to Richard Rodgers, young Webber was invited to opening night of The Sound of Music at the Palace Theatre in 1961, where he “knew I was hearing melodies that would become evergreen from a genius at the top of his game.”

Total rapture is the best way to put Webber’s first exposure to Puccini’s Tosca on the family car’s radio. Refusing to exit before the “Te Deum” was finished, the boy insisted on remaining there to listen while his family celebrated Christmas at Central Hall:

By the time the third-act bells of Rome were chiming I was totally wiped out. This was truly theatre music that I never dreamed possible…Here was a thirteen-year-old boy in floods of tears at 2 pm on a freezing cold Christmas Day seemingly in charge of the car and listening to opera on the radio full volume…

Unmasked covers much of Webber’s educative years and his gradual but steady evolution in the theater realm, which, from the magical vantage of memoir-reading seemed like a beeline from obscurity to universal success. I was delighted to learn some of the background tidbits about his famous creations. For instance, Cats was inspired by Old Possum’s Book of Practical Cats by T.S. Eliot. (Who knew? I didn’t!) And Joseph and the Amazing Technicolor Dreamcoat owes its existence to The Wonder Book of Bible Stories. Author Tim Rice, collaborator with Webber, stopped at the beloved Joseph story, and the concept of the coat of many colors clicked with them. “It had the primal ingredients of revenge and forgiveness,” says Webber. “There could be humour, particularly if Joseph himself was made out to be a bit of an irritating prick who in the end turns out to be OK.”

If there’s one thing that I can’t shake from reading Unmasked, it’s my conviction that before he passes away Webber needs to make a musical called Auntie Vi and the Amazing Gay Cookbook, which would surely be a heroic, humorous and PC-shattering production that this too-timid, blasé culture needs right now. If not just for a mandatory scene that would have Vi “showing her tits to a sacristan who had said her dress showed too much of her shoulders” and being expelled from the Pisa Cathedral. Talk about unmasked!