MASS: THE QUEST TO UNDERSTAND MATTER FROM GREEK ATOMS TO QUANTUM FIELDS by Jim Baggott 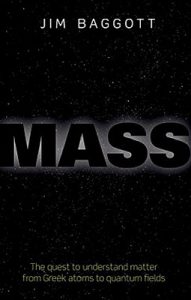 “It’s an energy field created by all living things. It surrounds us and penetrates us; it binds the galaxy together.” – Obi-Wan “Ben” Kenobi

Ever wonder what mass is? Not the liturgical Mass, but the scientific one, the one that has to do with matter, molecules, atoms and much littler, more boggling stuff. I rarely ponder the nature of mass, and though I was taught about it in a physics class, I never really grasped the concept nor retained enough particles of knowledge to begin to offer anything close to a sensible definition of it. So, when I spotted Jim Baggott’s Mass: The Quest to Understand Matter from Greek Atoms to Quantum Fields, I decided to read it in spite of my unscientific, illogical mind and my tendency to wonder “What’s the matter?” rather than “What’s matter?”

Well, to know mass, one must know matter – and vice versa. I think. Whatever, the history behind science’s current views on things such as materiality, energy, gravity, quantumness and spacetime is nothing less than fascinating. Baggott deserves praise for boiling down massive ideas to a comprehensible (and sometimes semi-comprehensible) level. (And I apologize in advance for my paper-shredder absorption of this stuff.)

Until now, I took mass and material for granted as obvious and straightforwardly measurable. Different objects have different mass, and a thing’s mass multiplied by the speed of light squared equals that object’s energy. (Right?) However, Baggott’s book topples our taken-for-granted assumptions and plainly reveals that “the concept of mass has vanished in a puff of mathematical logic.” A jarring statement in a book that is about mass, and indicative of the rather complex, topsy-turvy nature of nature in general. As Baggott writes near the end of the book, “never in the entire history of science has the rug of understanding been pulled to firmly from beneath our feet.”

It’s no wonder that another taken-for-granted thing, gravity, also is revealed to be more up in the air than once thought. Right before I tackled Mass, I’d read a Neel Patel article in Inverse Science which addresses physicist Erik Verlinde’s rethinking of gravity:

Instead of being a static property since the Big Bang, gravity has, according to Verlinde, been an emergent phenomenon, constantly growing and expanding and adhering to the rules of increasing entropy as outlined by the second law of thermodynamics.

Similarly, well into Baggott’s Mass, the following is said about relativistic mass: “[M]ass is not an intrinsic primary property of material substance; it is, rather, a behaviour. It is something that objects do rather than something that they have.”

Baggott starts with the Greek idea of reducing material down to “some kind of ultimately fundamental, indivisible type of stuff” and ends with the conclusion (at least at this point in scientific knowledge) that “[the foundations of our universe] are instead built from ghosts and phantoms, of a peculiar quantum kind.” The ever-fascinating, befuddling and in-your-face mysteriousness of quantumness is returned to again and again in the book. In fact, if the book offers any conclusive thought it’s that the secret of the makeup (and perhaps the origin) of the universe is a quantum affair:

Mass moves through the long stretch of scientific/philosophical bloom of the 17th and 18th centuries (Bacon, Galileo, Kepler, Gascendi, Boyle, Huygens, Descartes, Spinoza, Locke, Leibniz, Berkeley Hume, Kant), and there’s much focus throughout the book on Isaac Newton, whose classical mechanics were monumentally useful, influential and largely applicable – until the atomic/sub-atomic and light speed are considered, that is. Perhaps with Newton as the pinnacle, many of those aforementioned thinkers “were motivated by efforts to understand the world that God had designed and created and to reconcile their conclusions with Christian doctrine,” as Baggot puts it. This reminds me of J. Robert Oppenheimer’s 1962 statement that science owes its existence to “the medieval insistence of the rationality of God.”

But as experiment, hypothesizing, study and discovery flourished over time, rationality ended up questioning itself – and trust in the exactness and accuracy of how humans perceive the “outside” world was rattled. A far cry from Aristotlean form theory and Descartes’ cogito, David Hume claimed that we’re unable to know beyond our perception. Since his (skeptical) empiricism insists that one must experience things directly in order to obtain knowledge, metaphysics for Hume was a basically meaningless alternative. And a lot of babies are thrown out with metaphysical bathwater. If, as Baggott puts it, “the sensations we experience are constructs of our minds and exist only in our minds…then it seems we are denied access to the external reality that we’re trying so hard to create a structure for.”

Enter Kant, whose attempt at reconciliation between metaphysics, rationalism and empiricism eventuated a theory that intuition (not direct knowledge) allows us to sense the noumena in phenomena – but knowledge of things-in-themselves, however, is impossible. Though Baggott doesn’t get into all of this, it’s important to note that this compartmentalized belief in God from scientific observation and knowledge. For one of my favorite philosophers, Dr. Francis A. Schaeffer, this kicked off a widening of the gulf between belief in a creative God and materialism, leading, via Hegel, through a “line of despair” and secular/religious existentialism. In other words, faith and such were relegated to a non-rational category, banished from rationality and logic.

Ironically, Ayn Rand despised and criticized Kant as an obliterator of reason who minimized science and was mired by mysticism. She had an epistemological approach based to a large degree on her interpretation of Aristotlian law of identity (boiled down to A = A), and she viewed knowledge from an atheist/non-teleological vantage – though she unwittingly agreed with Schaeffer in rejecting Kant’s muddling of metaphysics. Like Schaeffer, but in a non-Christian way, Rand insisted that “existence exists” and is knowable by humans. (Schaeffer went farther, insisting on “the God who is there” and quite knowable, something Rand would have despised greatly.) For instance, consider this passage from her “The Metaphysical Versus the Man-Made”:

Whether [the universe’s] basic constituent elements are atoms, or subatomic particles, or some yet undiscovered forms of energy, it is not ruled by a consciousness or by will or by chance, but by the Law of Identity. All the countless forms, motions, combinations and dissolutions of elements within the universe – from a floating speck of dust to the formation of a galaxy to the emergence of life – are caused and determined by the identities of the elements involved. Nature is the metaphysically given – i.e., the nature of nature is outside the power of any volition.

But I stray from this review’s orbit a bit. Mass shows that Newton’s theorizing about gravity and the makeup of light (in his Opticks), paved the path for Albert Einstein and his study of atoms, the relativity of spacetime and, of course, the famous E = mc2 equation. Needless to say, the discovery of the speed of light was a mother lode of scientific knowledge.

Then the concept of elements was developed. Then the atom ceased to be the fundamental particle when protons, neutrons and electrons were discovered. Then isotopes were found. Then transuranic elements, then nuclear fission, then ominous isotope U-235. (We all know where that shit led.)

Rapid scientific discovery rattled even the reign of Euclidean space: spacetime was added to the three dimensions. Einstein determined that since spacetime is, as Baggott writes, “curved like an arc of a great circle, then an object moving along such a path will ‘fall.’ And as it falls, it accelerates.” According to Einstein’s deduction, an edgeless universe has a sphere’s major characteristic of curving back on itself. (Think time travel, Back to the Future geeks!) The relation of spacetime and matter are epigrammatically summed up by physicist John Wheeler: “Spacetime tells matter how to move; matter tells spacetime how to curve.”

To jibe with the spacetime concept, Einstein developed the general theory of relativity, which dispenses with gravity as a force and deals with spacetime as a gravitational field. Time’s relativity depends on gravitation of nearby objects and the strength of spacetime’s curvature. (Or something like that.) Baggott points out that GPS, one of the many taken-for-granted conveniences we have, is possible only because of Einstein’s relativity theories (special and general). I also learned from Baggott that magnetism is stronger than gravity and that “the magnetic force generated by the small magnet in your hand is stronger than the gravitational pull of the entire Earth.” Wow.

Thanks to Werner Heisenberg and Max Born, something called matrix mechanics entered the scene, and so did Heisenberg’s uncertainty principle:

Heisenberg’s basic premise was that when making measurements on quantum scales, we run up against a fundamental limit. He resolved that it is simply impossible to make a measurement without disturbing the object under study in an essential, and wholly unpredictable, way…[Q[uantum mechanics places limits on what is in principle measureable.

I’m reminded of Francis Schaeffer’s claim that “the principle of indeterminacy has to do with a certain area of observation, namely, the location of an object and its velocity” and not necessarily implication of a random universe. Yet, thanks to Erwin Schrodinger, the ghostliness of electrons and their orbital weird here-or-thereness, certainly raises eyebrows about certainty.

Niels Bohr bitterly disagreed with Schrodinger, insisting that it was an either/or situation: one addresses the wave-likeness of an electron or its particle-likeness. He thought that full knowledge of the electron is impossible, but it can be measured accurately on a quantum level. Baggott explains Bohr’s approach to observing electrons:

He goes on to make a statement that rings a little like the Hume/Kant perception/reality dichotomy:

Mass also presents the shift from the theory of a contracting universe to one of an expanding one, the possibility of future universal cataclysm and death (something to do with something called the Higgs field, etc., etc., etc.), dark matter and dark energy, quantum fields, quantum electrodynamics and the inadequacy of string theory. Frankly, Baggott’s monumental coverage exceeds the purview of this skinny review.

Baggott sensibly admits that “we don’t have a valid scientific theory that describes the ‘beginning’ or the very earliest moments in the evolution of the universe,” which should allay the caution of folks who believe in a created universe and tend to shun what might be construed as atheistic proofs. Though I’ll always side with Dr. Schaeffer about the apparent impossibility of “the impersonal plus time plus chance” resulting in the personal, love and the idea of freedom, and though I’ll never care about what matter is more than what’s the matter, I dig the intense questioning and probing of Baggott and earnest champions of science.

When something such as mass or matter is shown to not be as something as once thought, trust in formerly fundamental principles – and even the idea of absolutes – can be shaken. However, that needn’t be so. Baggott wisely writes that “glimpses of the truth are often revealed as though through a near-impenetrable fog” and that “progress is secured only when a sense of order can be established, and the fog is cleared.” He also assures us that we needn’t type “ultimate knowledge of everything” into our GPS receivers in order to appreciate the long and curvy trip.